Zak is the third member of the Zero Fleet. He is used for a wide variety of tasks around Sungboat Harbour. Zak's main role was that of a flunky man to devious Zorran. He is a confused tug. He's usually seen working with his fellow Z-Stack Zeebee.

Like the rest of the Zero Marine, Zak is based off the Moran Fleet tugs from the Roaring 20s. He's quite a thuggish character, often aggressive and threatening. Publicity material for the series indicated that he saw himself as a potential leader of the Z-Stacks. He has no major roles in any episodes, but is usually seen either assisting the Z-Stacks in their devious schemes and insulting the Star Tugs. His whistle sounds like Warrior's, but only deeper with two tones. Zak's most prominent appearance is High Tide, when he and Zebedee competed with Big Mac and Warrior for a steel contract. Engine trouble that Zak had neglected to get treated however forced the two Z-Stacks to take a shortcut through Bigg City's canal network. What Zak saw as a very clever idea however resulted in disaster when Zebedee's tall load destroyed the railway bridge. He speaks with a gruff Cockney accent.

In TLC's Salty's Lighthouse, he is voiced by Terry Klassen, giving him a gruff Brooklyn accent. In TUGS Zak is voiced by British actor, animator and modeller Shaun Prendergast, who also provided the distinctive voice of Sunshine.

Zak is the only Zero Tug to have brown skin,as the rest of the Zero Fleet had pale skin. 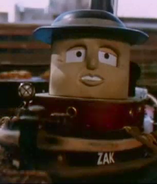 Add a photo to this gallery
Retrieved from "https://saltyslighthouse.fandom.com/wiki/Zak?oldid=5195"
Community content is available under CC-BY-SA unless otherwise noted.