The Pirate is a Pirate Tug who is known for stealing barges in the harbour. His appearance was quite intimidating,

especially his eye patch, a typical pirate trademark. He was a blackish-blue tug in colour, and didn't seem to work for any particular fleet, although the "Mi" symbol on his stack suggests that he worked for the munitions company, as the same symbol is seen on acciccories of the factory, such as warehouse doors.

Unlike other boats, he only existed in Top Hat's Dreams.

He speaks with an pirate accent. 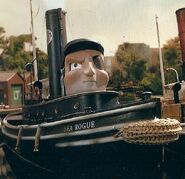 Add a photo to this gallery
Retrieved from "https://saltyslighthouse.fandom.com/wiki/The_Pirate?oldid=5193"
Community content is available under CC-BY-SA unless otherwise noted.