"Salty is a livley lad who loves to run and play

He waves hello to every Tug that chugs across the bay!"

Salty is a character of the cartoon segments. He is main character who loves using his imagination to cosimerrate with human and animal friends alike, learning all sorts of lessons.He has many adventures in Aunt Chovie's lighthouse.He has lots of friends that are Ocho, Aunt Chovie, Claude, Sophie and Sadie.

He is also known as his alter-ego The Salt Man. 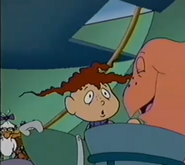 Add a photo to this gallery
Retrieved from "https://saltyslighthouse.fandom.com/wiki/Salty?oldid=5146"
Community content is available under CC-BY-SA unless otherwise noted.